I had an incredible dream last night.

Since our most recent little one came along, my changing sleep patterns have lead to some pretty vivid dreams. I’m sure my choices in moving picture entertainment play a role, too.

In this one, someone had died. A young girl.

I discovered that she had left me a series of clues – could she be any more cliché? The first clue was some sort of large origami box. I can’t remember what was in the box, but in the course of it leading us to the next clue, we (some shadowy other was with me) ran into this: 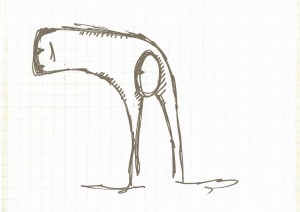 It was some sort of costume whose leather face was situated at the end of an impossibly long leather neck. It was something like a cross between Leatherface, Those We Don’t Speak Of and E.T. We saw this character in motion and later (much like in The Village) discovered it to be a costume, though the puppeteer was long gone.

Perhaps the strangest part of the story was that my friend Logan and every designer’s favorite nerd girl Jessica Hische were there experimenting with a crème brûlée torch that shot a laser that fed people. We’re talking life-altering stuff here.

Dreams are strange and amazing.

I’m sure this all meant something. Your conjectures as to what that might be are welcome.